In the recent months I have begun to understand the functioning of the Boys & Girls Club on a deeper level. The mission of the Boys & Girls Club is to foster positive youth development and how they do this seems pretty clear to anyone who comes through the doors. The club provides a safe, positive environment, supportive relationships, opportunities, expectations, and recognition for children, all which these kids might not be finding elsewhere. And fun. Fun always seemed in my mind to be the container that all these important ingredients fit into.  If it wasn’t fun, kids wouldn’t want to be there. 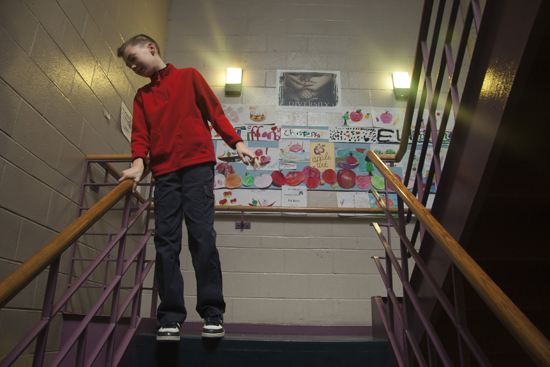 Jack, 11 on the stairs of The Boys and Girls Club.

There is one child in particular with whom I share a connection. Jack is eleven years old, thin and lanky with light brown hair, pale skin, and a dash of freckles across his nose. He is arguably the best-dressed young man at the club, arriving each afternoon looking smart in a collared shirt and sweater vest. Meeting him for the first time, Jack appears timid and hesitant, lowering his head and answering in a barely audible tone. But it isn’t long before he is clapping and singing and yelling at the other children to “slow down!” when they are running in the hallway. He has such a presence, on the days he isn’t at the club, it seems there is surely something lacking. 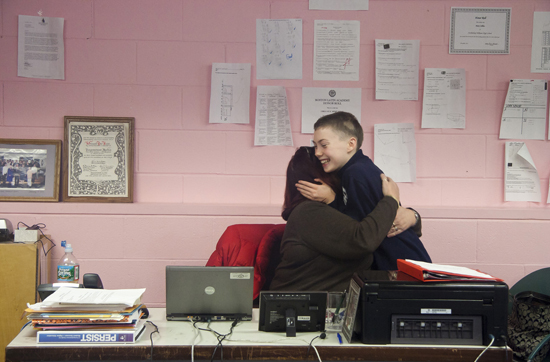 Jack hugging Trudie, a staff member at the Boys and Girls Club.

While Jack is legally blind, it is clear that his big brown eyes do register something- perhaps a combination of shape and color and light. If he knows you and you’ve entered the room, after a moment he’ll sense your presence and recognize that you’re there. Then he’ll start to sing to you, sing your name and ‘how are you today, is it cloudy, is the day almost over?” And for some reason, you always feel obliged to sing back. To enter a room where Jack is, you’ll almost always find a group of singing, laughing people, and Jack at the center of it all. Jack has autism and like any child he is innately curious about the world around him. And like other children with autism, he experiences the world in a different way. I am curious about his world, and his experience of it.

Getting to know Jack and learning more about autism, I had a lot of questions like why there are many different forms of autism and yet each child is still labeled with the same disorder. When I asked Jesse if she could define autism in her own words, she laughed a little, as if the idea was absurd and responded with a sincere ‘No.’ Autism is a spectrum disorder- meaning all cases fall under the umbrella of autism, somewhere on the spectrum. No two cases of autism are the same; they vary widely in terms of the child’s abilities and symptoms, and they can look very different. One person who has autism may show no obvious signs at first. He or she may communicate verbally and display a high level of intellect, but have an inability to make eye-contact when engaged in conversation. On the other hand, another person with autism may have little or no ability to communicate verbally and may have severe behavioral challenges because of this.

Jack, looking out from a window at the Boys and Girls Club.

There are some classic behaviors associated with autism, but still these are expressed across a spectrum of intensity. One of the main characteristics of autism involves routine or repetitive behaviors, like repeating words or actions, or playing in repetitive ways. Jack clears his throat, he smells the back of his hand, and touches his hair. He asks what time it is, and then he will ask again, only minutes later. And then again when that minute has passed. He likes to watch the clock, the second hand making one full circle, and when it has he’ll ask, ‘What time is it now?” Jessie describes this as ‘mind-looping,’ a self-soothing behavior. While ‘mind-looping’ and other self-soothing behaviors are common in autism, they are not specific to this disorder, they occur in many different developmental disorders and are a fairly typical trait. Like a lot of children with autism, Jack gets extremely overwhelmed by noise and over-stimulation in general. So when he asks what time it is repeatedly, often it’s because he wants to know how much longer he has to be in that environment. The question comes from anxiety and uncertainty; the answer makes him feel better. He may ask the same question one hundred times, in order to get the same response one hundred times back. 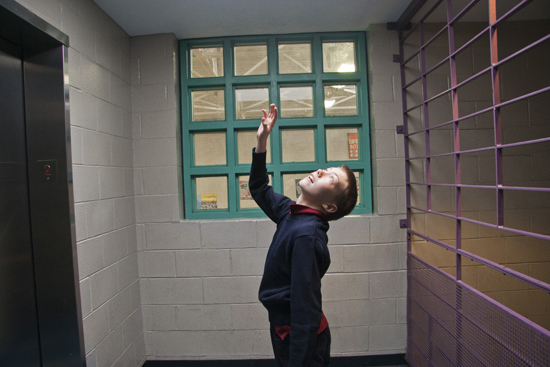 Jack, looking up towards a skylight at The Boys and Girls Club.

Jessie says she doesn’t buy it when people say, ‘we need to ignore those behaviors because they’re not typical.’ “I think they are typical. Other people just don’t say it out loud. I think we all want the same reassurance. Everyone has times when they feel worried or overwhelmed and we all have different ways of coping with those feelings. There’s a lot of things in the world that are completely out of control and maybe kids with autism have that feeling magnified. We keep calendars and planners so that we can know what’s coming up.These kids need that too, just in a shorter time frame. That’s why we use a lot of tactile things and visual aids,like a schedule you can carry around with you. It’s a lot easier to hold onto than something that’s in your mind.”

I think about why I make pictures.  A lot of the reason is to make sense of my experience and what is happening around me. It’s the same reason I enjoy writing, so that I can say this happened, this was real, and see the words on the page in front of me. Isn’t this how we affirm our memories- through pictures and pages, and the telling and retelling of what has happened. And in doing so, aren’t we simply reaffirming our own lives, again, and again. Isn’t that a self-soothing ritual in itself?