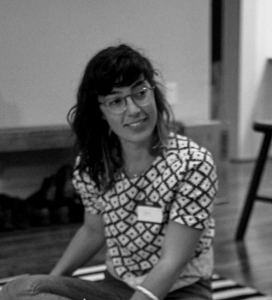 “What’s explained can be denied, but what’s felt can’t be forgotten” — Charles Bowden.

Jonna McKone’s work explores the way traces of the past become extensions of the present, sometimes grafted onto places or personal stories in ways that remain unseen, hardly seen, misunderstood or buried.  With a sense of place and research, her work aims to explore the connection between land and memory, testimony and history, and the ways documentary art is as much about the struggle of individuals to tell stories — as the story itself.

Jonna earned her MFA in Experimental & Documentary Arts from Duke University in 2014 and her BA from Bowdoin College. Her thesis films Yields and For The Time Being explored absence in a medium that so often expresses presence: an experimental observational film examining economic vestiges embedded in gesture and landscape in a rural region of North Carolina; a film that winds between her father’s archives, collective family memory and slippages in understanding across generations. While at Duke, she also worked with photography, oral history, sound, community-based art-making, archival materials and printmaking.

Alongside her documentary practice, Jonna teaches courses and workshops for universities and community-based groups including Johns Hopkins University, Appalshop, Skidmore College, Wide Angle Youth Media, Refugee Youth Project, Louder Than A Bomb and Hidden Voices.  She has worked as a radio and video producer/editor. Her audio work has been recognized by the Equal Voice Journalism Fund, the Institute of Museum and Library Services and with two first place awards from the Associated Press.

Her film, photography and audio works have been installed in film festivals museums, galleries and national memorial parks. She was a 2015 Skidmore Storytellers’ Institute Fellow and her current film is part of the Saul Zaentz Innovation Fund in Film and Media Studies.

Jonna is grateful to be a Lewis Hine Fellow: “I am honored and excited to have this period of time to facilitate and give shape to the work of young people and alongside them continue to engage deeply in collaboration, social documentary practice and storytelling.”

Jonna is working with the Price Family Fellows at Rutgers University. For more of her work, see her website.