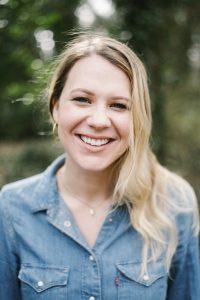 Lauren Mueller is a documentary filmmaker and a recent graduate of the Masters of Fine Arts in Experimental and Documentary Arts at Duke University. She is the recipient of the 2016 Kodak Student Scholarship Gold Award for her docu-fiction piece, The Gibbons of Santa Clarita, which Lauren developed into a feature-length film titled, Huro Huro.

For Lauren, documentary filmmaking is instrumental in facilitating social change and this is what draws her to filmmaking.  Lauren believes that in order to make powerful, socially conscious films, she must invest heself emotionally in her subjects and then the work will follow. In order to explore the multi-faceted nature of a subject, Lauren engages different perspectives in relation to one another to show the diversity and range of interpretation and experience. She believes personal stories have the ability to illuminate alternative perspectives that can advocate for change in the public sphere. Her work focuses on the collective voice rather than the singular voices that give rise to specific ideologies. Lauren’s strives to make her films open-ended – posing questions so that the viewer remains active in the viewing process and can draw upon their experiences to formulate their own conclusions.

Lauren began her film career working on a documentary titled Portraits of Sex Workers. The film was used for a conference led by the organization Liberation and Empowerment: Attaining Dignity and Rights (LEADR), which supports sex workers and their children in Bangladesh. In 2013, Lauren worked at the Northwest Film Center located in Portland, Oregon as a teaching assistant, teaching young adults from underserved populations about filmmaking. In the summer of 2016, Lauren received the Felsman Scholarship, which granted her the opportunity to travel to Kolkata, India to work with Asha Niketan, a community affiliated with the L’arche organization that provides support to people with intellectual disabilities. The film discourages labeling and the use of the word, “disabled” and instead, encourages the public, especially the Indian government, to see the strengths and unique qualities of the individuals at Asha Niketan. During her time at Duke, Lauren worked on her thesis, Huro Huro which looks at the conservation of gibbons, the smaller primates, but uses that as a vehicle to more closely examine the cross-section of culture and nature in conservation centers located in California, India and Thailand. The film underscores the disparate perspectives on conservation and raises questions about the effectiveness of varied practices and philosophies.

Lauren is working with Hot Bread Kitchen. You can watch her reel here: https://vimeo.com/222458980