One of the most challenging parts of moving to a new place has been introducing myself. People ask, “Who are you? What do you do? Why are you here?” It doesn’t feel like enough to say, “I am a photographer from New Jersey.” Am I a Lewis Hine Fellow from Duke? Or a recent Graduate from North Carolina? Am I just a photographer? Why am I here, really?

In an attempt to be honest, I stumble.

My daily commute is a long one. For the first time in my life that doesn’t mean I am the driver. Sitting on the NYC Subway each day has given me a time and place to read.

The first book I brought along for the ride was And Our Faces, My Heart, Brief as Photos by John Berger. I identify strongly with his writing. I arrived in the city and immediately felt something was missing. The horizon. The limit where vision ends and the sky meets the ground. I spent the last six years practicing the art of observation. Looking as far as I could to see as much as possible. Here distance is not measured by the same plain line. The absence of a horizon has left me feeling a little lost.

Waiting for the elevated subway, By Amanda Berg

Berger said home was the center of the world because it was the place where a vertical line crossed with a horizontal one. He believed that the crossing of these two lines, the reassurance that their intersection promised, was part of us all since embryo. My physical body is my vertical line. It comes with me everywhere I go. Where will I find a horizontal line to cross in this city of skyscrapers? 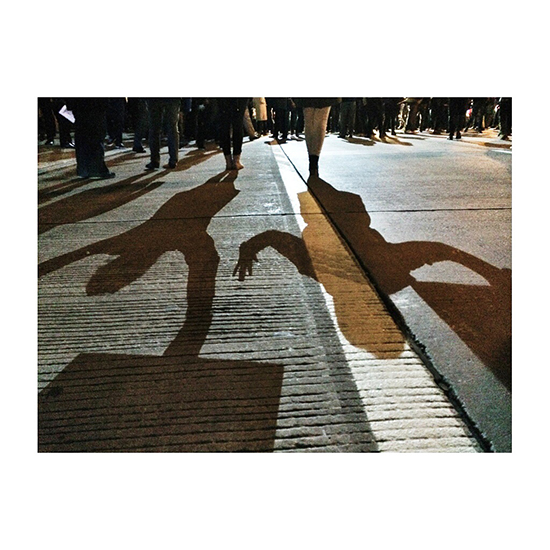 Lewis Hine moved to New York in 1904 from his hometown of Oshkosh, Wisconsin. He was invited by friends to teach geography and natural history at a new progressive school on the Upper West Side called the Ethical Culture School. He became the school photographer and began to explore the city with his camera. He used the images he collected to teach his students about current social issues. As Hine documented urban life he established the base of his practice on a foundation of photography and social work. He called his approach “sympathetic photography” and his pictures “levers for social uplift.”

Hine began by going to Ellis Island, then paid witness to child laborers across the country, moving on to document refugees in Europe during WWI, and ultimately, for his final project, Hine climbed to the top of the Empire State Building as it was being built and documented its construction. From there he could see everything. Yet, he chose to focus his lens not on the landscape but on the men at work.

Hine found his horizon in the working class. He saw himself reflected in the shared experiences of the people he photographed. For him “the crossing” Berger mentioned was that of individuals and society.

The commute home, By Amanda Berg

In his classic address to the National Conference of Charities and Correction in 1909, Hine said “the picture is the symbol that brings one immediately into close touch with reality.” In this sense, the picture is the shelter at the center of the real. The photograph is home.

I imagine; if I could introduce myself with one picture, what would it look like?