“Here, that’s Fu Manchu…you know him? And that’s Spock from the Starship Enterprise…just came out of my head. This one I didn’t get to finish…”

Two tan and weathered hands flick through a stack of pen drawings on printing paper.

“This is our co-worker…she doesn’t work with us any more. This is Wonder Woman. This is Hot Stuff…I used to love Hot Stuff, you know the comic books? Oh, forget about it. Here, that’s supposed to be New York City. See the twin towers there?”

The hands and drawings belong to Wilfredo Pedrero, or “Freddie” for short. The drawings span more than a decade of his work, and nearly every single one is dated in the corner with the exact time and geographical location of its completion. While Freddie provides me with a detailed explanation of every drawing, it’s almost unnecessary. His pictures are like carbon copies of his muses, the majority of whom are characters from his beloved comic book collection. Freddie never leaves the house without at least half a dozen comic books in his backpack.

“I’ve been collecting since I was eight years old,” he tells me, flipping through the pages of his most recent addition. Freddie is now fifty-five. He points out his favorite characters, the details in their costumes, and explains to me again why Superman has the best powers. “I love the stories; I love drawing from them. That’s the only reason I read my comics…to get ideas to draw.” Freddie places the stack of comics on the shelf beside us, right next to a box full of peanut butter jars that need to be stocked.

Freddie is the Superman of the Center for Family Life (CFL) food pantry.

The food pantry is just one of many services CFL offers. CFL is one of the original settlement houses in Sunset Park, Brooklyn, and it serves the neighborhood’s predominantly Mexican and Chinese immigrant community. Once every two months, any Sunset Park resident can come in and receive an emergency package of food that is meant to supplement their family’s diet.

It’s been twelve years since Freddie started running the show at the pantry. Not only is Freddie responsible for placing orders and handling donations, but once the food actually arrives, he is also in control of organizing it. This work is an exact science for Freddie. Every type of food has a particular place on the shelves and an even more specific way in which it must be stacked. More precise yet is the way in which the food packages must be assembled.

Freddie takes each client into consideration, and after reading over their identification sheet, makes specific food choices based on the ages and culture of the individual and their family members. The pantry operates Tuesday through Thursday, when residents are welcome to collect food between the hours of 11am-1pm. The rest of the time Freddie spends manning and preparing the pantry. When he’s not doing that, he’s doing custodial work.

“This place is clean,” Freddie tells me. “I do this. I keep it clean.”

Freddie and I are outside of the CFL main office on 39th Street. The thoroughfare is crowded, like always. The fire station across the street provides a constant soundtrack of sirens and hustle, along with all the noise from cars and passersby on the corner at 5th Avenue, the neighborhood’s main street. Freddie sweeps the pavement in front of the office thoroughly, pushing upheaved gravel over the curbside and back into the road.

“I try to tell people you’re supposed to think of this place as your home,” he says. “We try to make them think that this is their house, because everything we do here is for them.” 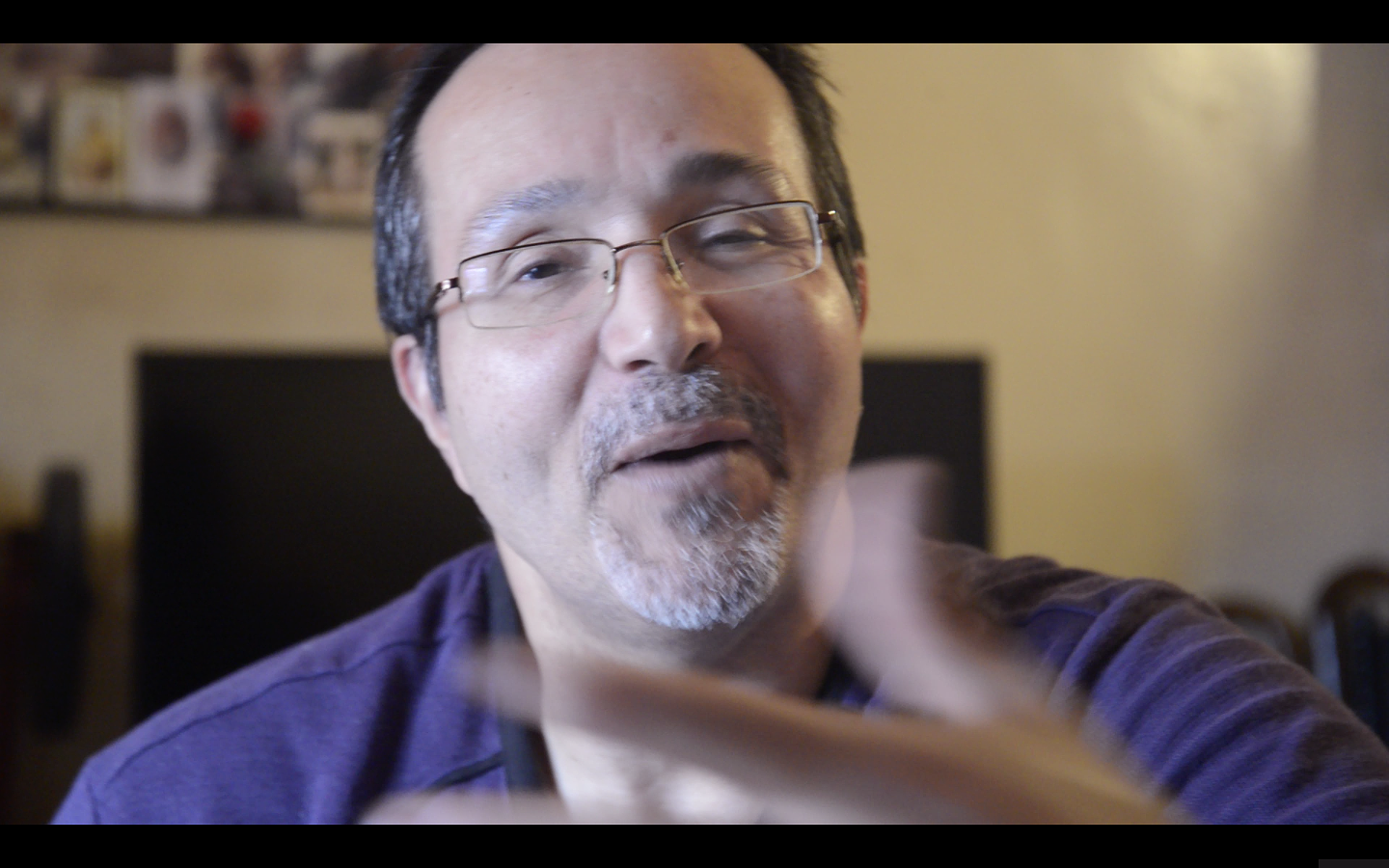 In his real home, Freddie is no less responsible. He lives in Coney Island in a neighborhood called the Marlboro Projects. He and two of his brothers, along with their girlfriends and children, live together in their mother’s old apartment. This is also where his mother single-handedly raised Freddie and his six siblings.

But Freddie spent his early childhood in Puerto Rico, where he was born.

“We lived in these little projects called Canales. It’s still there, but it’s bad now,” Freddie recounts to me. We’re sitting in his bedroom. Behind him on the wall is a huge bulletin board with pictures of his family, a few of his drawings and a certificate for perfect attendance at his job. “It’s so bad that the police don’t even go in there,” he continues, “but when we lived there, it was pretty nice.”

Freddie tells me he used to spend his mornings as a child asking for money on the streets; no shoes, just shorts. “No one’s gonna deny a little kid when they’re begging,” he says. He’d come home with pockets full of change and hand it all to his mother, who was raising their household on $21 a month through public assistance.

When the family arrived in the U.S. in 1968, they settled in Coney Island. Freddie has never lived anywhere else since. Today, he’s more than comfortable with this fact. But as an adolescent, the neighborhood proved to be more than troublesome for Freddie and his friends. 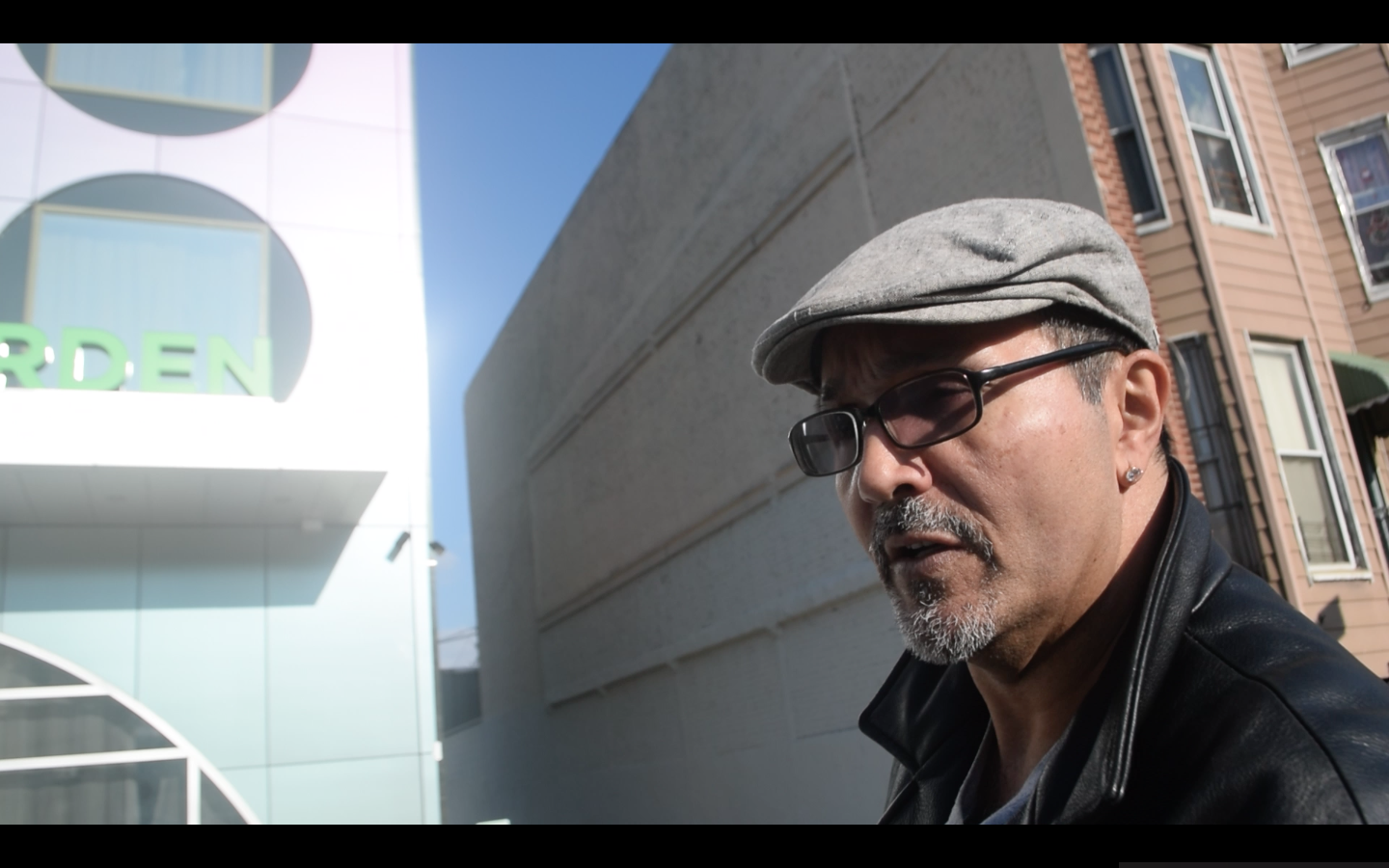 “We always did stupid things outside in the neighborhood,” he tells me. We’re still in his bedroom. He’s staring out the window through the gap between the shade and the sill. The wind is howling against the pane, it’s the coldest day of winter yet. Nowadays, you’ll rarely find Freddie outside of his apartment after 8pm.

“I don’t hang out like I used to,” he tells me. “I used to go to Alphabet City at three or four in the morning. Sometimes by myself, sometimes with a friend. Now I won’t even go out of my neighborhood.” Today, a good night in Freddie’s opinion is one spent catching up on his favorite TV shows (almost all of which feature superheroes) or flipping through his comic books. But the peace is often interrupted. Specifically, it’s interrupted by gunshots, which Freddie says he can frequently hear coming from the other side of the projects in the early hours of the morning.

While Freddie’s days dabbling in these same neighborhood activities may be long behind him, his status as a neighborhood hero is not. During the waking hours of the day, Freddie takes it upon himself to interfere when he witnesses activity like this in the projects. He will stop kids on the street – even ones he doesn’t know – and try to steer them in another direction. It’s his attempt at preventing them from taking the same road he did, which ultimately led him to multiple rehab stints.

Freddie has no difficulty talking about rehab. In fact, he speaks about his stints as if they were as commonplace as going to college.

And he almost did go to college.

At eighteen, Freddie was offered a full ride to Pratt Institute to study art. He made it through the first week of classes, then he got arrested.

“I threw away that scholarship,” he says as we skim through more of his drawings. He’s pulled out boxes of them from his closet and they’re scattered across the bed, which is bare save for a beige bottom sheet. “I was too young. If I could use it now, I’d go. But I guess I’ll just develop art in my own way.”

I ask Freddie if he’d ever consider using his art professionally. He explains that while he often draws things with tattoos in mind, he doesn’t see it panning out. His work day is demanding, and when he gets back to Coney Island, his other responsibilities kick in.

Freddie has helped his ex-girlfriend – who lives in an apartment just a few buildings down – raise her two sons since they were five years old. The boys are now grown and have children of their own, whom Freddie refers to as his “grandchildren.” When he gets back to Coney Island in the evenings, Freddie heads straight to the family’s apartment. He first walks the dog, Maxi. Then he takes care of the three grandchildren, the responsibilities for which can range from cooking dinner to playing Barbies. 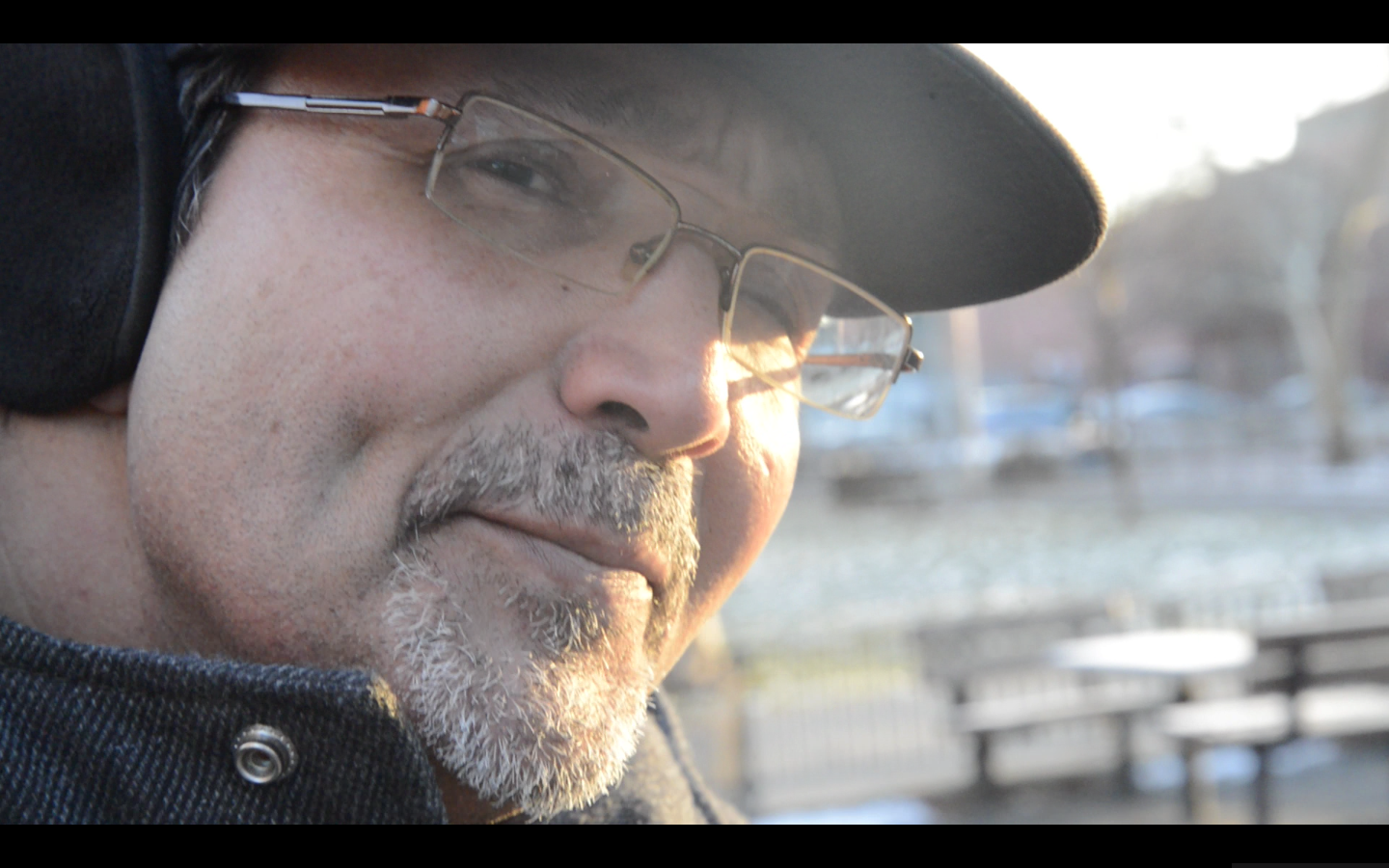 Not everybody in Freddie’s life is supportive of his unconventional situation. His brother often gives him grief for spending so much of his life with kids that are not his.

“I tell him a father is not the one who makes, it’s the one who takes care of,” Freddie says. “It’s easy to make kids. But if you’re not gonna take care of them, what kind of father are you?”

Freddie never met his own father. His one connection is a single photo taken when his father was seventeen. It’s black and white, his father is standing and looking straight into the camera.

Back at CFL one day, I ask Freddie who his favorite superhero is. He launches into an explanation about why it’s Captain America. It has to do with a particular encounter Captain America has with Iron Man, in which Iron Man accuses Captain America of not being a “real” hero due to the fact that his powers are all thanks to a special serum.

“The serum is what gives Steve Rogers his power,” Freddie explains to me. “Without it, he’s just a regular guy. But it’s not just the serum that makes him a hero.” 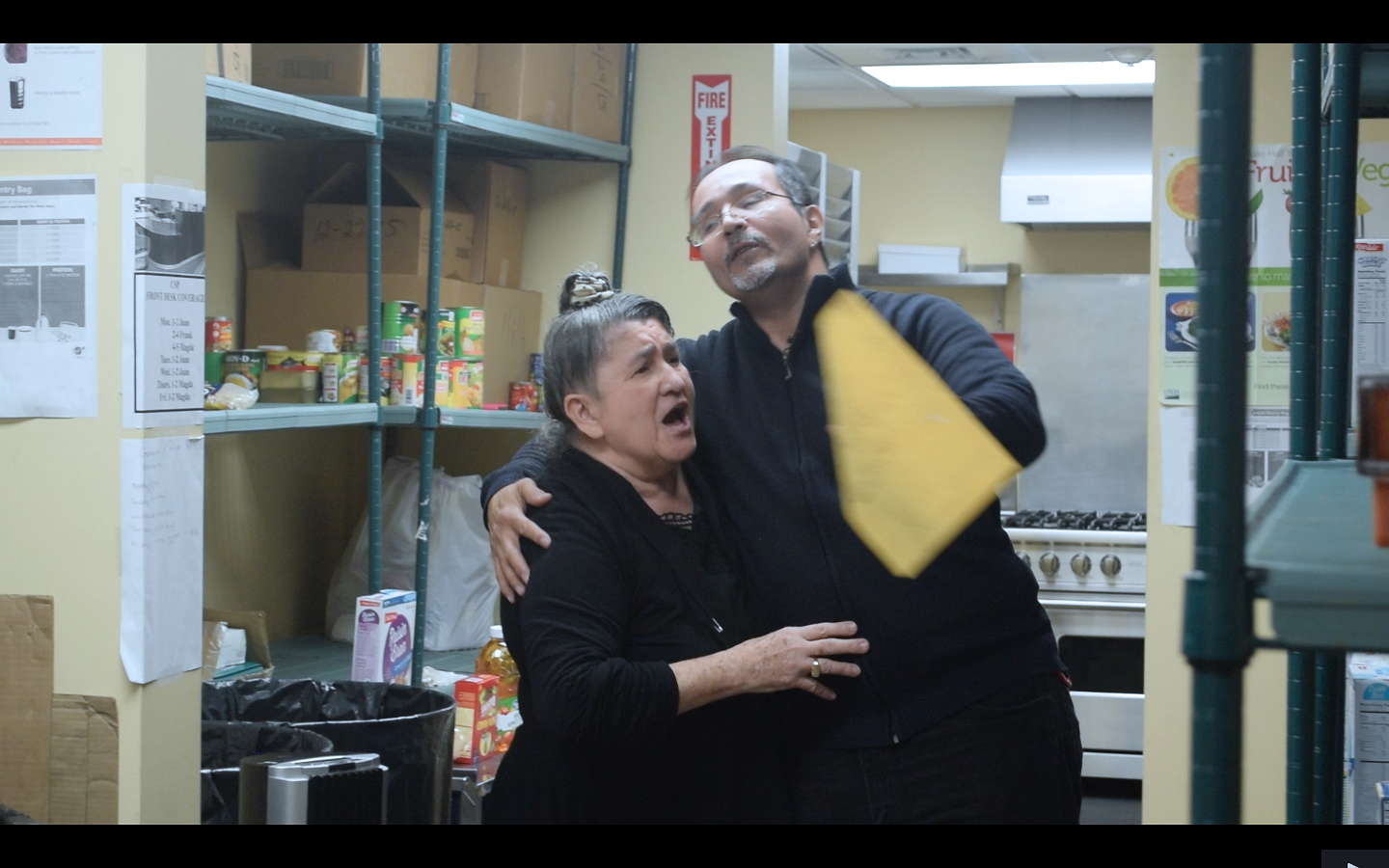 Freddie is about to elaborate on this when Gladys walks in. Gladys is the other food pantry attendant. She’s ten years older than Freddie; she also has ten years on Freddie as a CFL employee. She has six sons of her own, but Freddie is her seventh. He refers to her exclusively as “Ma.” This has held even more significance since Freddie’s mother passed away three months ago.

“It’s his whole persona,” he says about Captain America/Steve Rogers. “He always wants to help people out. That’s what makes him a hero, not the…”

“Yeah, Ma? What happened? It’s raining? Alright let me go get that for you…can we take a break?” Freddie asks me. “I gotta go get her something from the store…” 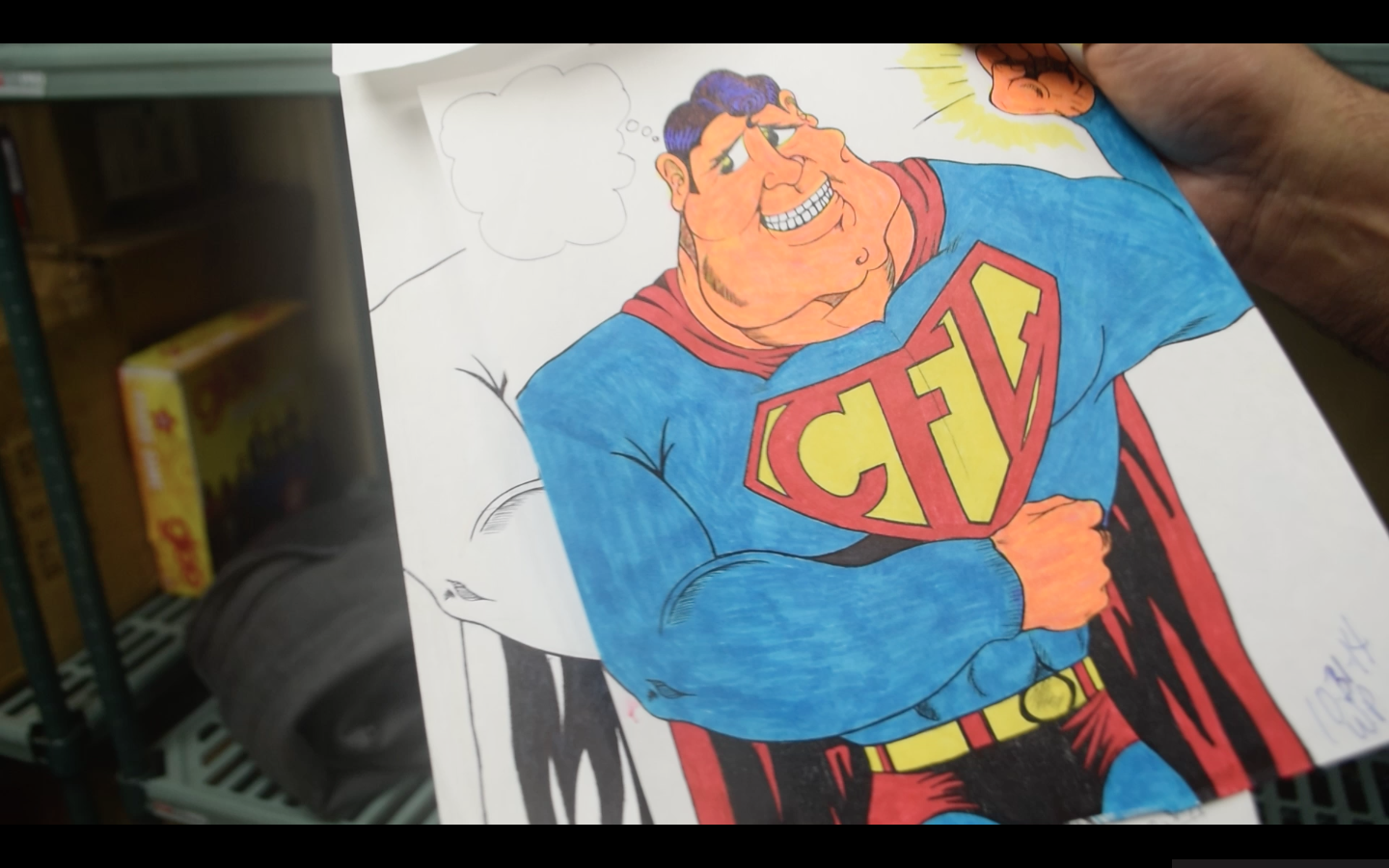