“Describe Freddie in one word.”

This was the question I asked all of Freddie’s nearest and dearest, AKA: his co-workers at the Center for Family Life in Sunset Park.

Each time, the recipient of the question took a moment to reflect before carefully selecting a word. These were a few of their choices:

Their responses were included in a short video I made for CFL’s Celebrating Community fundraiser, which is an annual event that brings together CFL employees and benefactors to celebrate the non-profit’s impact on the community. Each year, one of CFL’s 250 employees is chosen to be honored at the event for their hard work and dedication. This year, that recipient was none other than Wilfredo Pedrero, who, of course, is the star of my documentary Super Freddie.

It was a Thursday night at the end of May. New York was just starting to get hot, but it was already humid enough to break a sweat on the walk from the subway to the event, which was held in a trendy for-rent loft in Soho.

Freddie certainly broke a sweat in his newly-purchased maroon suit, which was unforgiving in the city heat.

“I got a bunch of compliments on the train here,” Freddie told me, dabbing the sweat from his forehead with a handkerchief. “People thought I was going to a wedding or something like that.” 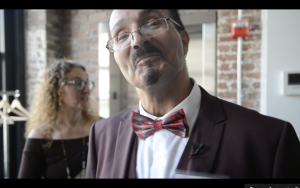 After an unsuccessful attempt to procure a hot dog outside the venue, Freddie headed to the fifth floor of the building, compulsively straightening his bowtie using the reflection of the brass elevator doors on the way up.

Enter Freddie. A room full of CFL employees and supporters buzzed with chatter as they sipped on cocktails and nibbled hors-d’oeuvres. Julia Jean-Francois, the executive director of CFL, spotted Freddie out of the corner of her eye and immediately went to greet him.

“You look incredible, Freddie,” she beamed. Freddie humbly accepted her compliments before trying to find his closest friends, Smilie and Frank. 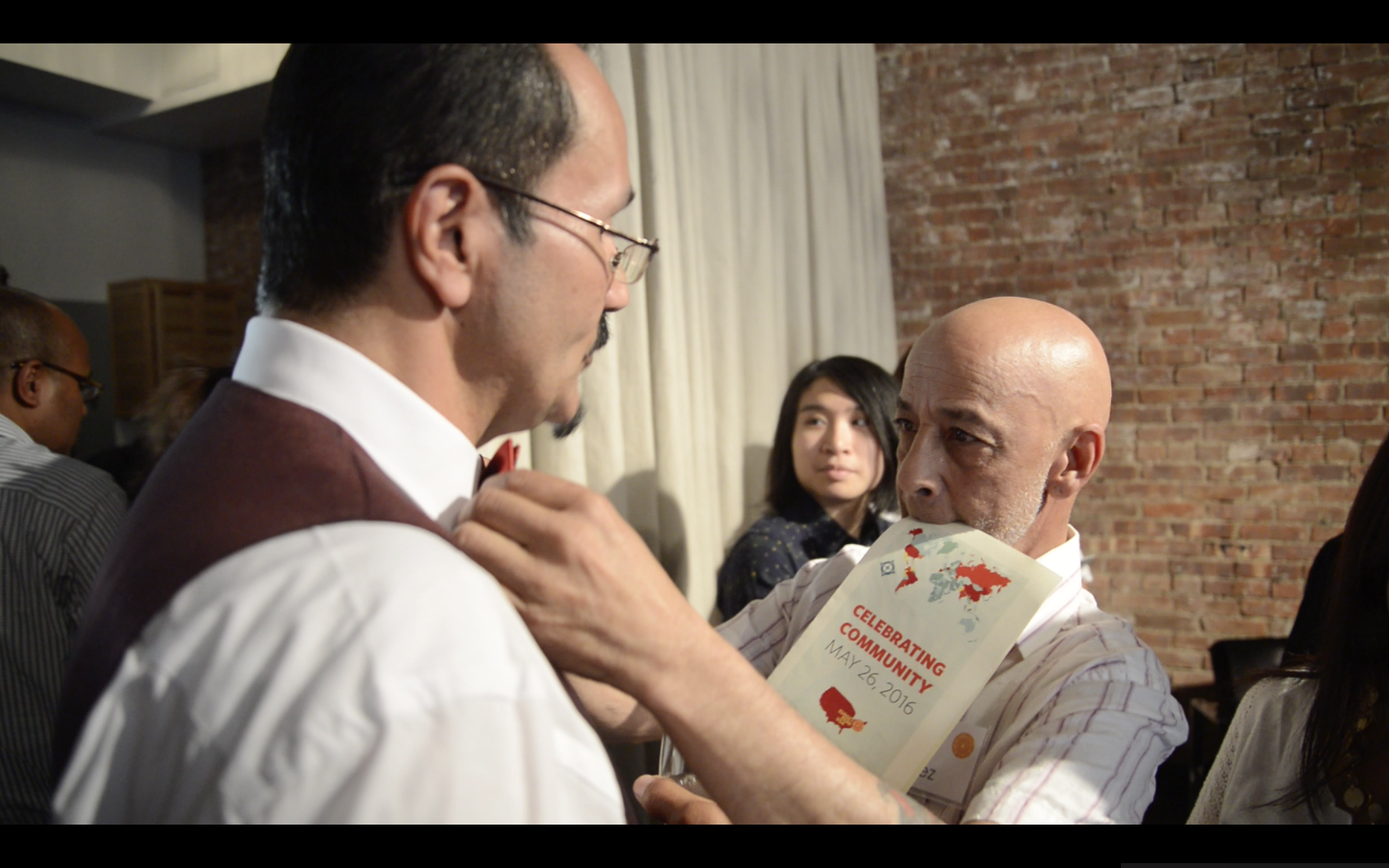 Everyone spent the rest of the evening in anticipation of Freddie receiving his award. Not wanting to miss a moment, I mic’d up Freddie with a wireless lav as I captured video footage from across the room, so I was privy to his innermost thoughts for the duration of the evening. The thing is, Freddie has no innermost thoughts, because he says almost absolutely everything he thinks aloud.

“Is my bowtie on straight?”

“I wonder who all these people are?”

“Do you think I can get onto the roof?”

“How am I going to go to the bathroom with this microphone on?”

Another forty or so minutes went by with Freddie making his rounds in the room, all to the tune of his inner monologue and a mariachi band playing in the corner (Freddie: “why would they get a mariachi band for this event?”). About ten minutes before the scheduled presentation of Freddie’s award, he asked if we could go outside for a cigarette.

“I’m really overwhelmed,” he confided in me once we were in the elevator. “Nothing a cigarette can’t fix, though.” Outside, we stood in front of the building as Freddie watched more and more people dressed in suits (though none in maroon suits) enter the double doors.

“Who are all these people? Do I know them?”

He ran his hands over the many different pockets of his ensemble in a desperate search for his cigarettes. Relief washed over him as he located one, brought it to his lips and lit it in one swift motion.

“I never got an award like this before. I’m nervous.” 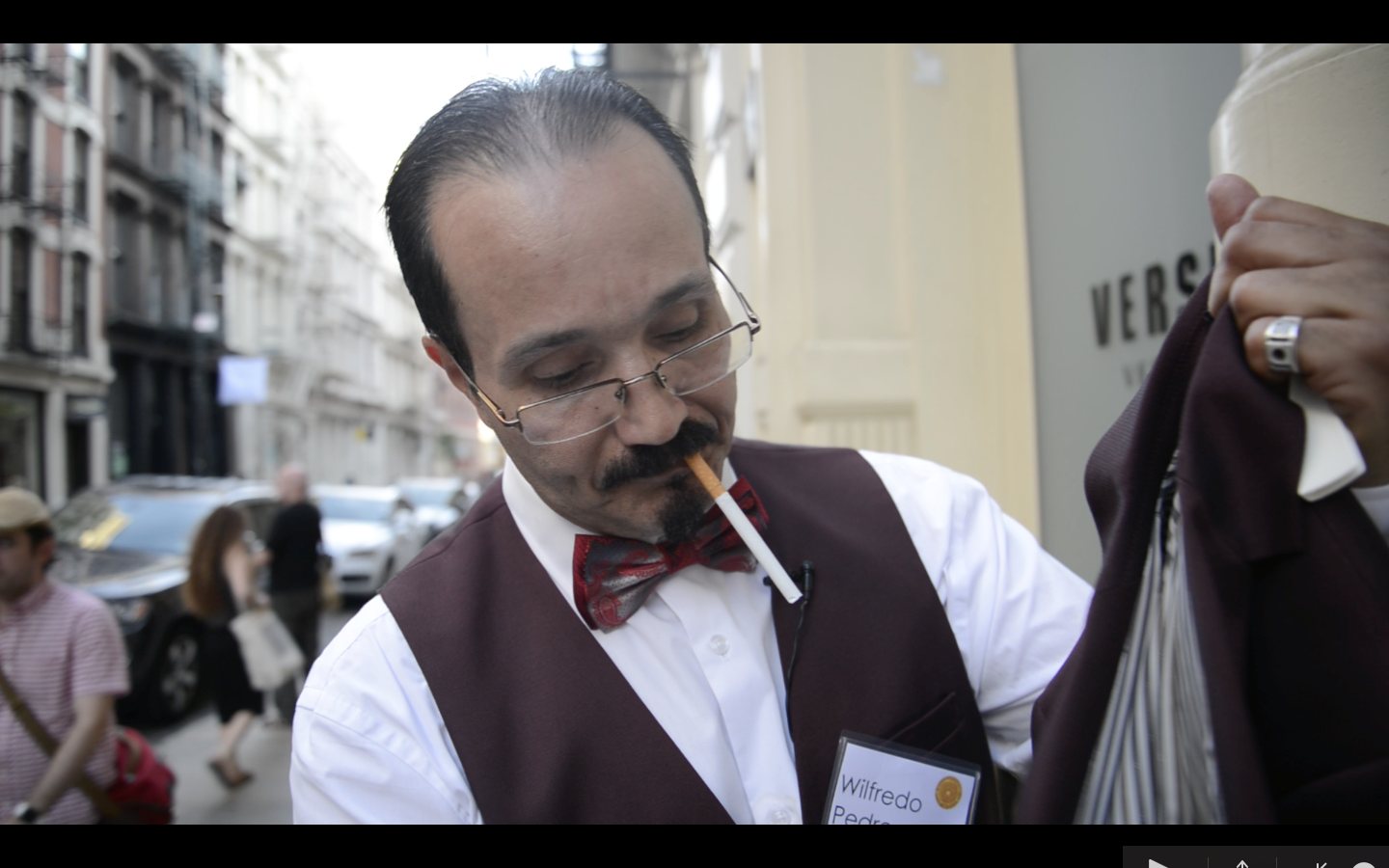 We stood out there for what felt like a while, Freddie getting a puff of his cigarette in between mouthfuls of conversation, before someone had to come and get us because they had already started the presentation of his award.

“Oh, shoot!” Freddie said, as he stubbed out his cigarette and stowed away the remainder in his jacket pocket for later. We hurried upstairs and made it to the front of the crowd that had gathered to listen to Julia’s speech about Freddie.

For the first time all night, Freddie was silent as he listened to what Julia had to say about him and his work at CFL. At the end of her speech, Julia presented Freddie with a thick, glass placard engraved with the words, “CELEBRATING COMMUNITY AWARD…presented with great appreciation to WILFREDO PEDRERO.”

Then, the video I made for the occasion began to play:

When the screen faded to black, everybody angled themselves in the direction of Freddie (who had now sought shelter in the back of the room) and clapped. They clapped for a long time. Freddie humbly received their applause, followed by a round of hugs from his teary co-workers who had appeared in the video.

I had a hard time keeping tabs on Freddie for the rest of the night, because he was constantly being pulled into groups to take photos or shaking hands with people who were congratulating him. At one point though, just before the very end of the event, we ran into each other seeking refuge on a couch in the back of the room, which had a plate of obscure-looking appetizers placed on a small coffee table in front of it.

Freddie pointed at the plate, “What is this stuff? Some kinda vegetable?” He held up an ominous-looking mush on top of a cracker and inspected it.

“I can’t eat this stuff. I’m starving,” he semi-whispered to me. “I can’t wait to get back home and have some chicken parmigiana.” The crowds started to trickle out and not long after, Freddie decided it was OK to head home, too. But before he left, he obliged my request for one last interview (and cigarette) out on the street.

Freddie looked like he’d walked off a movie set; the cigarette hanging cooly between his fingers as he brought it to his mouth, standing in his maroon suit in front of candy-colored Soho buildings in the magic hour light. 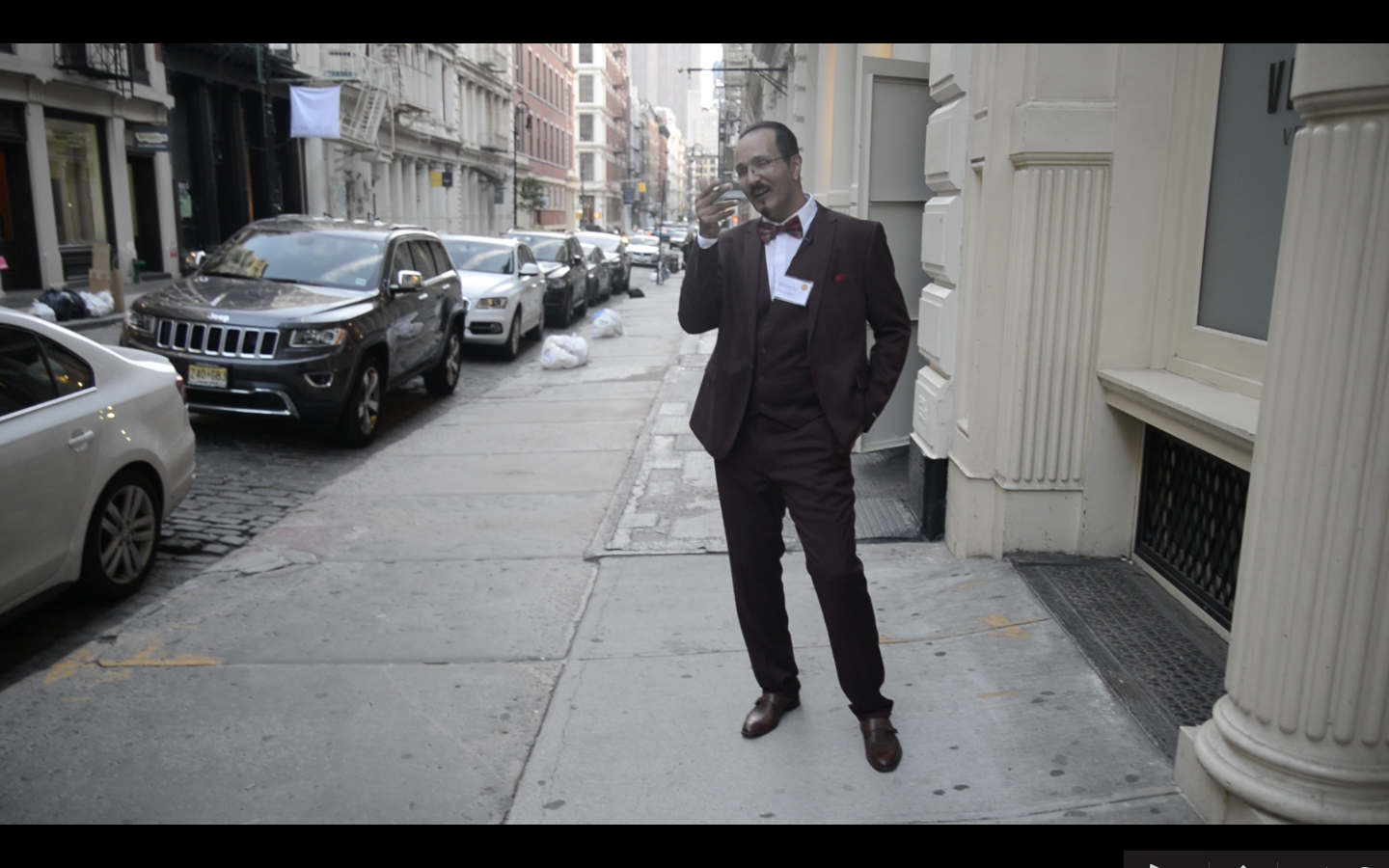 For a moment, he seemed like a completely different Freddie to me. Without his superhero t-shirt or his backpack of comic books, outside the confines of the food pantry without a box of groceries to shelve, it was like meeting Freddie for the first time in an alternate universe.

But the illusion soon faded when Freddie made a confession.

“I hope I don’t gotta wear another suit like this for a long time,” he said, backing up so my camera could take in the entirety of his outfit. “I know I look good but…these shoes are killing me!”